You’re invited to join Affirm United as we gather online every third Tuesday night of the month for a time of friendship and learning together in community. This is your chance to connect with people from across the country who share your passion for Two Spirit and LGBTQ+ justice and issues.

When we talk about safer and brave spaces we often don’t touch on the difference between empowering people and intentionally making space for people, their identities, their discomfort, their fears, their joy.

Thea will be focusing on how empowerment upholds the power imbalance and social hierarchies that exist in our society and how empowerment can be both necessary and harmful. There will be time for discussion, questions, and learning together.

Thea Sheridan-Jonah is a Grade 12 student in Oakville Ontario. Thea is passionate about getting youth involved in church work, social justice, the environment and Affirming. Her home church is St. Paul’s United Church in Oakville, Ontario where she has served on various committees including co-chairing the Affirming committee since 2018.

Outside of her home church Thea has been involved in various UCC events such as attending GC43 as a youth delegate, and as a member of the Horseshoe Falls Regional Council executive. Thea can’t wait to share more about her experience with you soon.

This spring we celebrate over 242+ Affirming Ministries who continue to be Public, Intentional and Explicit in the welcome of 2SLGBTQ+ people!

COVID has created much change over the last year for congregations and Affirming faith communities across Canada.  We were delighted when ministries who were “in the process” and completed the Affirming Ministry program rose to the challenge of celebrating in the safest ways possible.  Many anniversaries, celebrations and P.I.E. Day events moved online to Zoom, Facebook and YouTube.  The creativity of these services and all the people involved with making meaningful services, has been inspirational!

Affirm United / S’affirmer Ensemble continues to work with national Regional Councils as they explore what it means to be Affirming in their transitioning entities. We are grateful to all Affirming Ministries for the continued commitment to diversity and inclusion.

The work of Affirm United’s Council continues to grow and we look forward to another Virtual Summer Conference in July, 2021. With thanks we continue to work this year with Ren Ito (General Council Office staff resource to AU/SE) who supports us in many ways.

It is time once again to ask you to please submit your Annual Affirming Ministry Report and your updated contact information to Michele our Communications Coordinator no later than May 31, 2021.

It is always inspiring to hear what you are doing throughout the year. We will share news and stories received from Affirming Ministries via various communication tools (website, social media, eNewsletter). We encourage you to connect with other Affirming Ministries listed on the website and those ministries in your area that may be considering becoming an Affirming Ministry, to remind ourselves that “We are not alone, we live in God’s world…”

On May 16, 2021 Kamloops United Church in Kamloops, British Columbia will celebrate a very special 25 Year Anniversary of Affirming Ministry!

Send your congratulations to office@kamloopsunited.ca or use this form below to send your message!

We encourage everyone who is eligible to participate in a community-based research project, created by survivors, for survivors.

2S-LGBTQ+ people who have been harmed by expectations of change (subtle or blatant, religiously-based or not), are invited to: Complete an Online Survey, submit an Email Response, join a Focus Group, request a One-on-One Interview.

Take the Survey at https://www.surveymonkey.com/r/F7RWXNM

Our focus is to listen to those who have been harmed, assess support needs through an intersectional lens, develop an advocacy plan, and work with Canadian partners to deliver the supports needed to recover.

This project is funded by The Women and Gender Equality Department of Canada’s LGBTQ2 Community Capacity Fund.

Tickets: $15-$30. Every ticket type gives you access to ALL of the sessions.

Peace and Protest: Creating Change with Love and Intention

We explore the ways that our faith calls us to bring justice, love, peace, and hope into the world.

This year we reflect on the ways in which our communities have been strained and constrained by the pandemic and the increasing polarization of an “us vs. them” mentality. How do we resist the urge to “other” others, while still standing our ground and working for justice?

Rev. James Lawson was instrumental in shaping America’s Nonviolent Civil Rights Movement. After incarceration for refusing to report to Korean War draft, he traveled to India to study Ghandi’s principles of nonviolence. After being introduced to Dr. Martin Luther King, Jr. and moving to Nashville, he mentored a number of young students and future civil rights leaders at Vanderbilt, Fisk University, and other area schools in the tactics of nonviolent direct action. His students were instrumental in movements such as the 1963 March on Washington, the 1965 Selma Voting Rights Movement, and The Freedom Rides, to name a few. Rev. Lawson moved to Los Angeles in 1975, where he was the pastor for 25 years. He continues to be a civil rights activist and teacher on non-violence.

Rev. Lawson will be speaking on our title theme, “Peace and Protest,” and we will have a Q&A with him after his talk.

Semler recently became the first openly queer artist to hit Number 1 on the iTunes Christian music charts with their EP, “Preacher’s Kid.” The project explores Semler’s experience growing up as a queer person of faith. Semler has been featured on NPR, The Washington Post, and Apple Radio. Preacher’s Kid was recorded independently by Semler on a USB mic, and received over a million streams in just a few months.

We will have a Live Performance from Semler along with a special Q&A!

IN DEFENSE OF BLASPHEMY – a talk with:

Anthony is an award-winning writer of prose fiction, graphic novels, essays, and journalism. He is also a recurring contributor to Marvel Comics, his work for which has won the GLAAD Media Award for Outstanding Comic Book. He is the weekly host of The Devil’s Party, a podcast exploring the classics of Christian literature (including John Milton’s poetry and the Gospels) through a queer scholarly lens.

GET YOUR TICKETS HERE!

You’re invited to join Affirm United as we gather online every third Tuesday night of the month for a time of friendship and learning together in community. This is your chance to connect with people from across the country who share your passion for Two Spirit and LGBTQ+ justice.

This coming Tuesday we’ve invited Ally Phillips to be our guest speaker and will talk about how staying in touch with our LGBTQ2S+ siblings can be a challenge during times like these, how are you staying connected during these isolating times? What do queer friendships look like and mean to you? Let’s talk about the understanding, acceptance and love we can bring to each other in friendship and fellowship.

Ally Phillips lives, works and worships in St. Catharines, Ontario with his favourite sidekick, Reese the blind beagie. Ally serves as an openly queer and trans person at Silver Spire United Church as Co Chair of council, member of the Affirm committee and youth group leader. Outside of church life, Ally enjoys working with youth, coaching lacrosse, caregiving for his Granny, cooking delicious gluten free food and being trans in public.

Phone In instructions to ZOOM:

Canada (dial the number in your area code or use the Toll Free number below enter the meeting ID and the passcode with your key pad):

See you Soon at the Kitchen Sink!

All are welcome to a celebration of becoming an Affirming Ministry for Runnymede United Church on Sunday April 25, 2021

Please send a note of congratulations to the entire faith community of Runnymede United Church through this private form or send an email directly to office@runnymedeunited.org

END_OF_DOCUMENT_TOKEN_TO_BE_REPLACED

On May 16, 2021 Kamloops United Church in Kamloops

An Affirming celebration 🎉🎉🎉 is planned f

An Affirming celebration is planned for Toronto Ea

Today is a day of celebration! It is #TransDayOfVi

An Affirming Celebration is planned for June 27th,

The Kitchen Sink Series returns next week! Join u

An Affirming celebration is planned for Shining Wa

An Affirming celebration is planned for Hinton Uni

As part of our Public, Intentional and Explicit co

Is God calling you to share your gifts by serving

It's #PancakeTuesday !!! Come and get your fill of

How to capture JOY in a picture ... you do it like

All welcome to a celebration online of becoming an

AUSE Newsletter | May 2021 | The Kitchen Sink presents: Should we Empower or Make Space? - https://t.co/Wm3kcAA48R https://t.co/X9mTPOTygz
View on Twitter 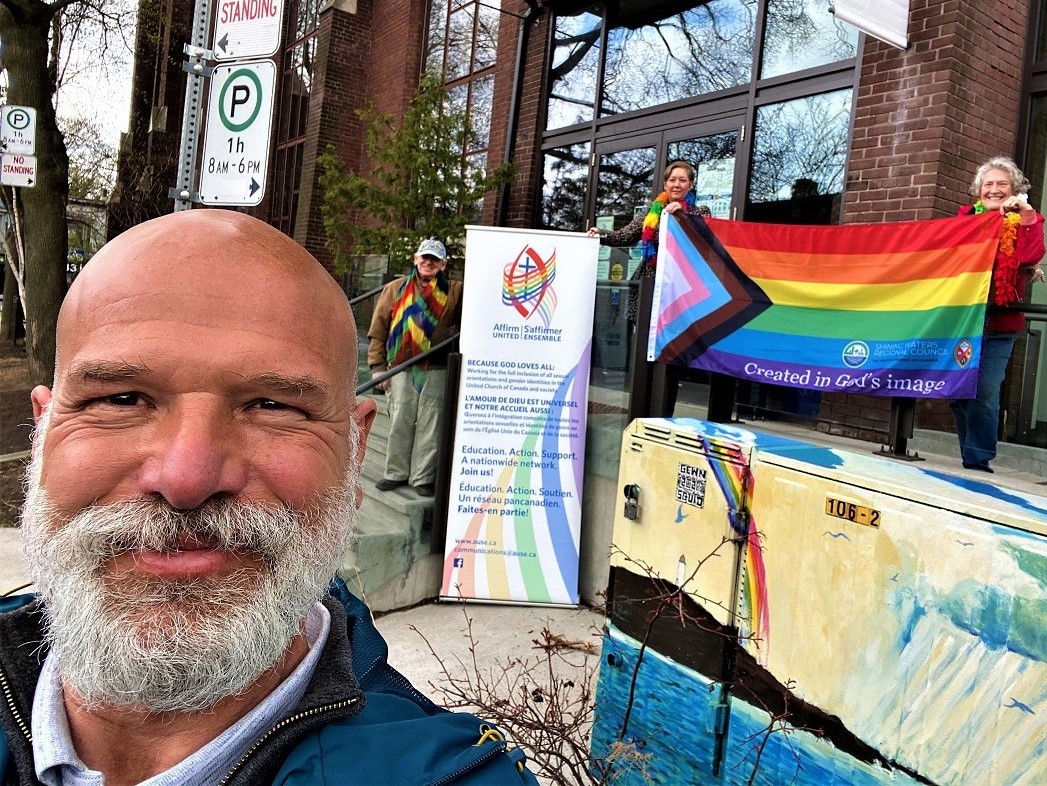 The Kitchen Sink presents: Should we Empower or Make Space? with Guest Speaker Thea Sheridan-Jonah on Tuesday May 18th at 7pm https://t.co/yr2Yv81OX2
View on Twitter

Affirm United/S'affirmer Ensemble
Kamloops United Church in Kamloops, British Columbia will celebrate a very special 25 Year Anniversary of Affirming Ministry! Send your congratulations to office@kamloopsunited.ca or use this form below to send your message!