The Moderator does not work from a printed text when she speaks. These are her expanded notes, and we thank her for sharing these with us at AU/SE’s request. (Photo: Ella listening, or not, to the sermon.)

In Christ, God has reconciled humanity to God.

This suggests that our relationship with God must have been broken. How?

God is the offended party… the brokenness has occurred as a result of our unfaithfulness to God.

Paul speaks of our being reconciled to God through Christ, and tells us – all this is from God. God is the injured party in the human-divine relationship; and yet it is God who takes the initiative to reconcile… it is God who reaches out to us in love and mercy and forgiveness. The reconciliation we have with God is pure gift – wholly unearned and undeserved.

Having extended this grace to us, and having modeled for us, in Jesus, the way of reconciliation, God now invites us to become ambassadors of reconciliation – to help heal the brokenness in the world… entrusting to us this important ministry – of repairing the breach, and healing creation, of restoring human dignity, and setting right the relationships among peoples.

It’s worth noting, however, that this invitation comes with a promise, which is also a warning:

The reconciliation that God has initiated and in which we have been invited to participate undoes the old and makes everything new. It’s requires what, today, we might call a paradigm shift.

But see – Jesus says the same thing! He was always saying – You must look at the world with new eyes if you want to see the kin-dom of God:

There are lots more examples.

Jesus challenged conventional wisdom and societal assumptions at every turn. And not just with words.

He also showed people another way to live– the way of intentional downward mobility.

He wasn’t interested in securing for himself a place at the center of society, but rather ensuring that no one was abandoned on the margins. The only times we ever see him at the center of power is when he is there confronting authority, challenging privilege, and driving out the demons of oppression.

Jesus demonstrated and invited – invites – his followers into a life of radical solidarity with the most vulnerable and marginalized in society. He choose to associate with the folks who were deemed unacceptable, expendable, of no account. He treated them like they mattered.

He also challenged head on the social, religious and political systems that justified and propped up the status quo.

Those are the “old things” that have to go, to make way for the new thing that God is doing.

That’s what Paul is saying too… the old practices, laws, attitudes that result in inequality, injustice and broken relationships have to go, to make way for this wonderful gift of reconciliation. Which probably explains why he had to “entreat” (which means to plead with, or beg) the Corinthians to accept this amazing gift from God. It’s a gift that can be difficult to receive… especially for those who enjoy a certain amount of privilege. The reconciliation God offers, which makes all things new, necessitates the passing away of the old beliefs and structures that privilege some at the expense of others. Accepting reconciliation requires that we relinquish privilege and the systems that give rise to privilege.

For the reconciliation that God offers us, which makes all things new, we must let go of the old things – the beliefs and structures which privilege some at the expense of others. Accepting this reconciliation requires that we abandon our privilege and the systems which create privilege.

At that’s the difficulty.

To enter the kin-dom of God, I must relinquish my privilege.

And I don’t want to.

Here in Canada and in the church we have tasted and are beginning to understand something of the challenge of accepting this gift… reconciliation requires that truth be spoken and listened to. It has been hard to hear the truth about the Residential Schools, and to tell it.

We have been confronted by our brokenness and our culpability.

And that’s just the beginning… reconciliation requires that we right the wrongs – historical and contemporary; that we commit to doing things differently. All things must be made new.

This is a good time for this text in our church. The long, difficult work of reconciliation is before us. Undertaking this journey of reconciliation will change everything… even the things some of us may not want to change.

When I was in South Africa in the early 90’s, I could not understand how white South Africans could tolerate Apartheid. They obviously benefitted in all kinds of ways – socially, politically, economically… but at the cost of their own humanity. It was clear to me, from where I stood – on the outside looking in – that Apartheid was bad for all South Africans, including whites.

What I had not been able to see, up until then, was how my humanity, and the humanity of every Canadian was being distorted by our toleration of the injustices perpetrated in this country against Indigenous peoples. It was the Oka crisis of 1990, which broke out while I was in South Africa that brought this truth home for me.

The divine invitation to become ambassadors of reconciliation is an invitation to accept liberation from ways of thinking, acting and organizing our societies that destroy our humanity and the planet.

So why does Paul have to beg the Corinthians to accept this liberation?

Why did people react with such anger and violence to Jesus’ ministry of reconciliation?

Where I stand influences what I can see and how I interpret it… what benefits me feels benign, right, good… and makes me unable to see how the same reality is experienced as oppressive by others.

Hearing the truth of another’s experience that radically reinterprets my own experience is extremely uncomfortable and hard to accept… everything in me wants to deny and dismiss what they are saying.

Any change that will eliminate systems and practices that privilege me doesn’t immediately feel like “liberation”… it feels like a threat.

We have seen this kind of reaction in some of the comments on social media and in the mainstream media in reaction to the Black Lives Matter demonstration that took place at Toronto Pride this year. Frankly, I was shocked by the level of racism and callousness they revealed within the LGBTQ community. Reading these comments, I felt ashamed.

It got me thinking about how hard it is for those who have had the experience of being marginalized, but who have now attained some level of social acceptability, to allow themselves to be drawn back to the edges, to stand in solidarity with those who continue to be left out. We don’t welcome their voices, their critique, their challenge of the new status we are enjoying.

The lure of privilege is seductive.

Jesus saw that the way the Law of Moses was being interpreted and applied by the temple authorities in his day privileged certain members of the Jewish community at a tremendous cost to many others – particularly the most vulnerable and marginalized – the poor, the sick, the widows.

Jesus was clear that nobody’s status as an oppressed person or group gave them immunity from critique when it comes to the oppression of others. He pursued with equal vigor justice for the Jewish people suffering under Roman occupation, and justice for the poor who were exploited by the Jewish temple economy.

Those Jewish leaders who appreciated and accepted this pointed, but loving correction from Jesus – Nicodemus and Joseph of Arimathea ­- were notable for being exceptions.

Friends, we now find ourselves confronted with a choice – who will we be? Joseph of Arimathea, who dared to risk his reputation and his comfort in order to have his eyes and heart opened… or the disciples, who were so impressed with the size and grandeur of the stones of the temple that they were blinded to the injustices being committed within its walls… or the temple authorities who were so afraid for themselves and their position that they chose to silence the message of life.

Paul himself – the writer of the letter to the Corinthians – had to be driven to his knees and struck blind before he would see the truth and allow himself to be liberated from the bonds of bigotry, ignorance and complicity. Yet having experienced the new life that follows this gut-wrenching reconciliation with God through Christ, Paul is convinced that it is worth all the turmoil, disillusionment, lament, and effort it requires.

That is why he begs the Corinthians to accept God’s reconciliation… and why he begs you and I to be reconciled as well… so that we might become the ambassadors of reconciliation that our world so urgently and desperately needs us to be.

Conversations that Matter with the Naramata Centre 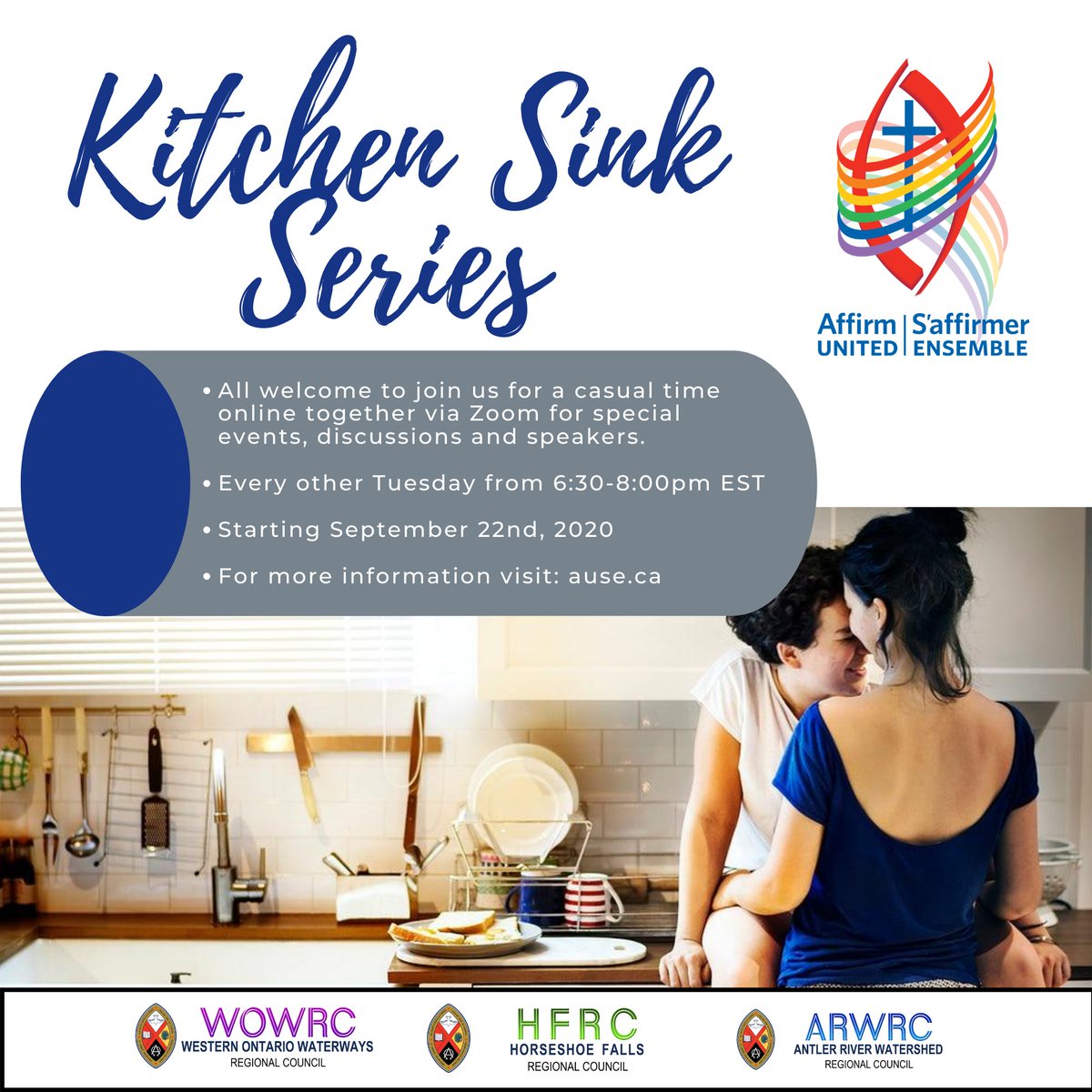